As part of a range planned to be released in 2016 by HEXBUG, Witch Doctor is one of multiple robots in the RC Series and features a working weapon separate from the drive motors. It is a very accurate representation of Witch Doctor, though at the moment lacks Shaman that was with it on the TV show. When the toy is activated or turned off, its drive wheels move back-and-forth briefly. Much like the previous BattleBots toys, Witch Doctor has pieces that come off to represent damage, namely two wedge pieces clipped on and its top held in place with magnets. The included palm-sized remote allows the toy to be controlled with 1 of 4 possible channels. In spite of having four wheels like the real robot, only the front two are powered by motors. If you buy the toys separate from one another, or from the HEXBUG website, each one comes with their own special sticker that references the robot being replicated as a toy. When not in use for roughly 30 seconds to a minute, the toy will shut off automatically. Due to the rear wheels not being motorized, the toy cannot run upside down like the real version. An updated version was made featuring the Discovery Season 3 design of the robot and is already officially released, though some stores did find the 2-pack with Bronco early. This version of the toy features the real robot's self-rightng mechanism, though it cannot self-right the toy if it is flipped. It also has a removable front, top and back panel. Witch Doctor has also been released with Bronco as part of the BattleBots Arena playset and individually.

The prototype out of its packagint at the New York Toy Fair 2015. 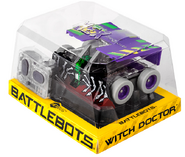 The finished toy sealed in its packaging. 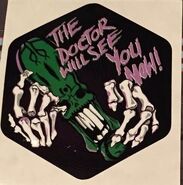 A sticker included with the toy if ordered on the HEXBUG website.

A prototype of the 2018 version of Witch Doctor as a toy.

The final product out of its packaging. 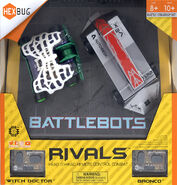 The playset sealed in its packaging. 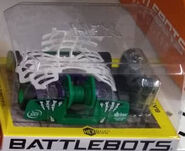 Changes from the Prototype

When the toy was released, certain changes had been made from its original prototype showcast at Toy Fair 2016.

1. The wheels were gray on the prototype but were changed to white for the final product.

2. The colors on both the prototype's removable lid and front plow were much more dull but were made darker and more vibrant for the toy's final release.

3. The red light inside the prototype was removed for the final release.

4. The motor that powers the prototype's blade was a lower pitch than the motor of the final product's blade.

5. The remote control for the prototype was orange and blueish but was changed to be gray for the final release.

6. The tires for the prototype's wheels are narrower than the final product's tires.

7. The lid for the prototype was less durable than the final product's lid.

1. Owners of the toy have found possible problems such as the supports for the weapon interfering with the remote, preventing the toy from either moving or activating/deactivating the weapon.

2. The pull tab for the remote can also become a problem if half the tab is missing or broken off, preventing the toy from working until the piece is removed frum underneath the battery in the remote.

3. Similar to the RC Tombstone, the RC Witch Doctor may get stuck on the edge where the floor transitions to carpet, especially with its low ground clearance at the front.

1. Since the toy has no way to result in a KO, one way to rectify this is to remove the battery cover underneath the toy. This allows the batteries to fall out, giving the feel that the toy has been KO'd.

2. If the first tip seems too unconventional or you don't want to lose the batteries, you can make the fight last longer by adding a rule that disables the part if it is hit with the opposing toy's weapon (a wheel for example). However, since the wheels turn simultaneously, both wheels will have to be hit for this rule to knock the toy out.

Since Witch Doctor is a four-wheeled drumbot, you can convert it to HyperShock some modification. Paint the wheels black and make the front scoop hollow below the weapon. The disc will need to be enlarged so you may need a 2nd Witch Doctor toy to make this look accurate. After that, just paint the weapon silver and follow the necessary steps to make it look more like HyperShock. However, with the release of the 2nd Witch Doctor, it can easily be used as the new HyperShock considering the removable panels and overal design are pretty close to HyperShock's original toy design.

This one gets a bit more tricky if you're choosing El Diablo as El Diablo is a tracked robot. This may require actually addding treads and additional wheels up front, perhaps using the old Witch Doctor axles as a starting point. Otherwise, you could just make static treads on the side or paint the wheels black to give El Diablo an upgraded look. The rear set of spikes could prove challenging to add but taking a small amount of the armor panel off could make it work. The spikes on top will probably be even more difficult but only if you want it to be invertible, in which case you may want to use Minotaur instead as it is already a two-wheeled robot with some room for modification and a wider drum. Concussion may also prove easier with Minotaur due to the similarities the real robots have with each other.

As demonstrated online, it is possible to create Whiplash using the old Witch Doctor toy by painting the front wedge scoop red and creating a lifting arm around a newly 3D printed weapon. However, you could also use the original Witch Doctor weapon and paint it red, though this may affect the toy's performance if it is not done properly and will also require extra time for paint to dry. You will also need to paint the tires black and the wheel hubs red if you want a fully accurate representation.

Retrieved from "https://battlebots.fandom.com/wiki/Witch_Doctor/RC?oldid=55954"
Community content is available under CC-BY-SA unless otherwise noted.