As part of a range released in 2001 by Tiger Electronics and Hasbro,  Vlad The Impaler  was 1 of 8 robots in the RC Custom Series. The former two-time champion of BattleBots was easily recognizable, but it lacked some accuracy. Between it's lifting forks there was a third static fork, possibly designed to help with flipping, though the weapon was connected to the drive, which made the weapon less effective. The robot is also nearly if not completely impossible to be flipped because its body cover very nearly completely touches the ground. Like other robots in the series, Vlad The Impaler contained the same chassis as the other toys and built in impact sensors allowed "vitual damage" to be shown on the robot, as a result of ramming. Flashing LED on top of each toy displayed exactly how much damage it had taken, and the robot would cease to function once its light was no longer illuminated. The toy is a decent representation of the robot but on each side of the robot is a "2", but they aren't present on the real robot and occupy the space where the Loctite logo or the real robot's name would be.

The prototype as seen on the pamphlet for the BattleBots PocketBots keychains. 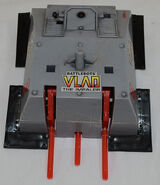 Vlad the Impaler Custom Series sealed in its packaging.

The toy re-released for Tournament Edition.
Add a photo to this gallery

Retrieved from "https://battlebots.fandom.com/wiki/Vlad_the_Impaler/RC_Custom_Series?oldid=51991"
Community content is available under CC-BY-SA unless otherwise noted.