As part of a range of toys by Tech4Kids, Tombstone was selected as one of at least four robots to be made into a toy. The toy is built somewhat like a puzzle, featuring two types of pieces that fit together that could come off to represent damage. Most of these pieces are somwhat flexible, have a rubbery feel to them and fit relatively snuggly together if they're in their proper places but the pieces for the top are a more solid plastic and the right side piece is only held in place with gravity. The toy is easily recognizable as Tombstone, complete with the red blade, though the wheels are much taller and thinner than the real robot's and the section above the blade is not the real robot's grid-like pattern. The toy is powered via remote control using the four main buttons on the front for steering and the two buttons on top for the weapon. A third wheel not powered by the remote sits underneath the weapon and simply acts to help balance the toy while it is moving ir resting upright. Like the other Tech4Kids BattleBots toys, Tombstone has a kill switch at the bottom-left corner of the toy that not only prevents the toy from being controlled with the remote if hit but causes the two pieces of armor on top with the robots name on them to pop off and turns on a red light on top of the toy. It is also important to note that the weapon does not continue spinning once either button at the top of the remote is pressed. Instead, the weapon will spin in one of two directions based on which button you hit as long as you hold that particular button. This toy is also available as a 2-pack with Bronco.

The prototype out of its packaging at the 2017 New York Toy Fair. 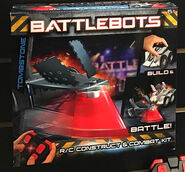 The mock packaging of the single toy. 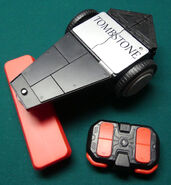 The finished product out of its packaging and fully assembled. 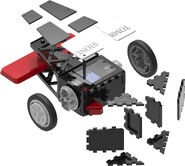 The toy broken apart to show all the pieces to be assembled.

The front view of the two pack's box.

The back view of the two-pack's box detailing the toys.
Add a photo to this gallery

Differences from the Prototype

1. The wheel, kill switch and removable panels are now a mixture of flat plastic and puzzle piece-like panels.

2. The top removable panels now resemble the top plate of the real robot.

Unlike other BattleBots toys, the remote for this toy does not have an on/off switch. Instead, it has only a sleep mode function that turns off the remote after 2 minutes of inactivity.

Retrieved from "https://battlebots.fandom.com/wiki/Tombstone/Tech4Kids?oldid=54133"
Community content is available under CC-BY-SA unless otherwise noted.