As part of a range that was released in 2016 by HEXBUG, Tombstone is one of multiple robots in the Push Strike series and features the real robot's first spinning bar used in the real tournament but like the RC version, the weapon is red instead of silver as a result of the designers merging the shape of the signaure silver bar with the color of the red bar. The rest of the toy is easily identifiable as Tombstone but the body is narrower, likely as a result of scaling down the real robot for merchandise. Much like the original Battle Bashers toys, some of the Push Strikes feature weapons that move when the toy is pushed. In the case of Tombstone, its weapon spins as the toy is pushed along, though only the left wheel makes the weapon spin. An alternate version with a black blade similar to the RC version released with the arena playset is slated for release later this year.

The prototype of the toy out of its packaging at New York Toy Fair 2016. 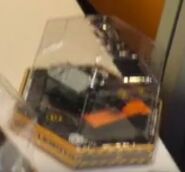 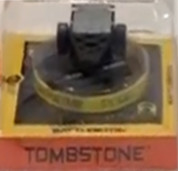 The prototype alternate version with the black blade and writing.
Add a photo to this gallery

Differences from the prototype

1. The blade on the prototype was orange but is red on the actual toy.

Tombstone is one of two robots to have two releases in two different products with no changes to how the toy is designed apart from a new paint job. The other robot is Minotaur.

Retrieved from "https://battlebots.fandom.com/wiki/Tombstone/Push_Strike?oldid=55703"
Community content is available under CC-BY-SA unless otherwise noted.