As part of a range that was released in 2016 by HEXBUG, Tombstone is one of multiple robots in the RC Series and features a working weapon separate from the drive motors. The toy is easily identifiable as Tombstone as it has Tombstone's design and first spinning bar used in the tournament, but the spinning bar is red instead of silver as a result of the designers merging the shape of the signaure silver bar with the color of the red bar. When the toy is activated or turned off, its drive wheels move back-and-forth briefly. Much like the previous BattleBots toys, Tombstone has panels that come off to represent damage, namely two rear panels held on with magnets and a top piece resting over the electronics. The included palm-sized remote allows the toy to be controlled with 1 of 4 possible channels. If you buy the toys separate from one another, or from the HEXBUG website, each one comes with their own special sticker that references the robot being replicated as a toy. If the toy is not in use for roughly 30 seconds to a minute, the toy shuts off automatically. A 2nd version of the toy was unveiled with a black version of the red blade from the original RC toy and the real robot's sponsor ships and an updated paint job. It has been released alongside a somewhat updated Minotaur RC with a re-release of the BattleBots arena playset and individually. 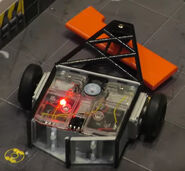 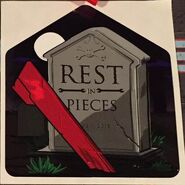 A sticker included with the finished toy when ordered from the HEXBUG website.

The updated version of the toy.

The updated Tombstone toy with the black blade.
Add a photo to this gallery

Changes from the Prototype

When the toy was released, it had multiple differences compared to the original prototype.

1. The wheel that connected the pully to the weapon was changed from a bowl shape on the prototype to a more disc shape.

3. The red light inside the prototype toy was removed for the final release.

4. The blade on the prototype was orange but was changed to red for release.

5. The remote control that came with the prototype was orange and blueish but was changed to be gray for the final release of the toy.

6. The speed of the blade on the prototype is a bit slower than the speed on the blade for the final product.

1. The weapon is powered by a belt rather than a chain

2. The wespon is red (or black and white with the re-release) instead of silver with dark gray teeth

3. For safety reasons, the weapon is much less powerful and thus also lacks the gyroscopic effects the real robot suffers after impacts.

4. The wheel hubs are black instead of white

5. There is no armor over the weapon support.

1. Owners of the toy have found possible problems with the toy such as the toy not working or the magnetic rear pieces coming off on impacts that don't involve them.

2. The nut that helps hold the blade into place can come off and become lost, which can cause the axle to come out and thus take the blade off, though this can be used for additional "damage" in matches.

3. One or both rear panels can be knocked out of position in such a way that the toy's wheels do not touch the ground.

4. Be careful when driving the toy over a floor that transitions to carpet as the toy can get stuck over the edge separating the two surfaces.

5. The top panel of the toy isn't held by anything and can easily come off on impact.

1. Since the toy has no way to result in a KO, one way to rectify this is to remove the battery cover underneath the toy. This allows the batteries to fall out, giving the feel that the toy has been KO'd.

2. If the first tip seems too unconventional or you don't want to lose the batteries, you can make the fight last longer by adding a rule that disables the part if it is hit with the opposing toy's weapon (a wheel for example). However, since the wheels turn simultaneously, both wheels will have to be hit for this rule to knock the toy out.

As the toy is a two-wheeld robot, you can convert any toy version of Tombstone into one of several robots from the Comedy Central era of the show.

Remove the mount for the blade and attach two spikes to the top edge at one end one end, preferably the end that drives forward. Then  build a box shape around the body, making sure that it's relatively long and ends up putting the drive wheels in the center. caster wheels or other substititues can be used to keep the toy level.

One other possibility is to convert it it into a horizontal spinner like Mechavore or even better Surgeon General. Mechavore may prove easier in a sense because of how the original Tombstone toy is shaped. However, you'll probably still want to add fake wheels and extend the body but you may have to incorporate the removable rear panels into the toy for fairness. Surgeon General on the other hand is certainly easy givren its design and flat back, allowing the removable pannels to be more easily incorporated. Simply repaint the body dark reddish and swap out the bar for a plastic disc. Since the toy is already invertible, that part is already done.

Retrieved from "https://battlebots.fandom.com/wiki/Tombstone/Hexbug_RC?oldid=57808"
Community content is available under CC-BY-SA unless otherwise noted.