As part of a toy line by HEXBUG, Minotaur was chosen due to its high success in BattleBots ABC Season 2. It is a very accurate representation of Minotaur as it features Minotaur's overall design, including the blue light seen through gaps in the bot, however it is slightly bigger in scale and the red eyes in the artwork don't light up. Like the other HEXBUG RC Battlebots in the line, Minotaur has pieces that come off to represent damage. In the case of Minotaur, its side panels and top can come off and its side panels are held in place with magnets. The drum does not achieve the same power as the real robot due to not only safety concerns but the weapon's material and the weapon motor's overal size and power. In other words, it can't do the gyrodance or drive on one wheel. Unfortunately, the drum has difficulty knocking off armor panels because of its narrow attack range. Even so, the drum spins at a high rate of speed, higher than Tombstone or Witch Doctor in this line, likely to represent the real robot's actual high-speed weaponry. Mintoaur has been re-released with sponsorships alongside a somewhat updated Tombstone RC with the BattleBots arena playset and individually.

1. The weapon has far less reach

2. The feeder wedges are higher off the floor.

3. For safety reasons, the weapon is much less powerful, though this also means it cannot right itself using gyroscopic forces.

4. When inverted, the toy tilts forward.

The prototype out of its packaging. 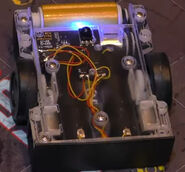 The updated Minotaur with new sponsors on the lid.
Add a photo to this gallery

In case you want to modify this Minotaur toy (or any of the Minotaur toys released) into a robot you enjoy more, here are some robots you could convert it to:

Converting this toy will be a bit tricky and you probably won't be giving it reads without additional modification. The drum and removable panels are easy as you just need to paint the drum silver and the other pieces red. However, since El Diablo also has spikes on top, it may end up not being invertible if you add the spikes unless they are very flexible or painted on. The release of another Build Your Own Bot RC toy come with treads and there is a better drum accessory that could work better and thus could in turn be the better way to go.

Even though this robot is four wheeled, it can still work by extending the toy's chasses and applying fake wheels on the back. After that, you can simply follow El Diablo's remodelling instructions but changing the colors to reflect Poison Arrow's.

This Robot Wars reboot competitor may be your best bet as that robot is a two-wheeled drumbot. Simply paint the body panels orange and make the other necessary changes to reflect the real robot's appearance. The drum doesn't have to be modified though and may give you trouble considering there isn't much space to add to the drum.

Retrieved from "https://battlebots.fandom.com/wiki/Minotaur/Hexbug_RC?oldid=57809"
Community content is available under CC-BY-SA unless otherwise noted.