BattleBots MiniBots were small rubber toys produced by Interactive Toy made to resemble the competitors' robots from BattleBots. They didn't have any moving parts, not even the wheels could turn.

All fifty MiniBots were based off the respective robots' Season 2.0 incarnations.

MiniBots came in packages of two (as a "Flow Pack"), three (as a "Blister Pack") or five (as a "Power Pack") and came with a checklist, a small sticker with a picture matching one of the figures in the package and a mini drawstring bag. The eight Season 2.0 finalists from each weight class also had silver versions released called ChromeBots, which were significantly rarer than the MiniBots. Eight of the 50 were also Limited Edition gold versions with hologram symbols that granted the owner a trip for two to the next Battlebots tournament and were 1 in 500,000 chances. A collector's series was also available that featured home versions of the tournament itself.

The poster advertising the toys. 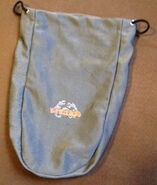 The drawstring bag included with the toys.

The advertisement for the drawing contest to a BattleBots tournament.

Two different displays of the packaging and a highlight of Chromebots featuring Diesector as one.

Early render of the first 8 Minibots.