As part of a range of toys released by HEXBUG, HyperShock was chosen to be the next robot released alongside Bronco and some build-your-own-robot toys. The prototype faithfully recreates HyperShock's Season 2 design, complete with the rake used to take out Team Whyachi's drone, which can be moved manually. However, the front wheel hubs are gray instead of green. Like the other Hexbug RC BattleBots toys, HyperShock features three removable panels that come off if hit hard enough. In the case of HyperShock, the top panel, front scoop, and the rear panel with the robot's name come off. Ultimately, this toy is seemingly on hold as Witch Doctor has taken its place. 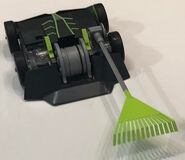 The prototype HyperShock on display.

The toy without its top or back panels. 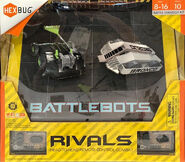 The prototype 2-pack featuring HyperShock with Bronco.
Add a photo to this gallery
Retrieved from "https://battlebots.fandom.com/wiki/HyperShock_RC?oldid=55694"
Community content is available under CC-BY-SA unless otherwise noted.