As part of a separate branch of the HEXBUG BattleBots merchandise, End Game was selected as one of at least two robots to be made as a kit by VEX Robotics. Unlike the Bite Force kit, this kit is not powered by motors, nor is it remote controlled and it is is also smaller than the other kits in the line, apart from Warhead.  It's a very accurate representation of the robot, featuring the giant blue flywheel, End Game's name up front and the orange wedge and is currently available for purchase on the HEXBUG website. Although it doesn't have the self-righting mechanism seen with the 2nd version of the robot, there are holes to make one yourself. Also included with the kit is a sheet of paper with various information, including how to calculate the actual End Game's weapon physics.

A prototype of the box the kit comes in.

The full prototype unboxed and assembled. 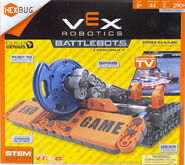 The final version of the box the kit comes in.
Add a photo to this gallery

Retrieved from "https://battlebots.fandom.com/wiki/End_Game/VEX_Robotics?oldid=58356"
Community content is available under CC-BY-SA unless otherwise noted.