As part of a range released in 2001 by Tiger Electronics and Hasbro, El Diablo was 1 of 8 robots in the RC Custom Series. Like other robots in the series, El Diablo contained the same chassis as the other toys and built in impact sensors allowed "vitual damage" to be shown on the toy, as a result of ramming and fake scars like the 2nd Edition toys. Flashing LEDs on top of each toy displayed exactly how much damage it had taken, and the robot would cease to function once the light was no longer illuminated. The toy itself is based on El Diablo's Season 2.0 version due to the spiked drum and horns and is a fairly accurate representation of the robot apart from the additional holes for the spiked horns, the much smaller and higher up spiked tail and not being invertible.

The prototype as seen on the pamphlet with the BattleBots PocketBots keychains. 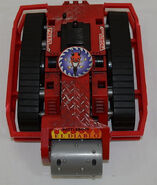 The toy out of its packaging, minus the horns.

The toy sealed in its packaging.
Add a photo to this gallery

Since the toy is designed to be customized, one can easily make robots from other shows such as:

El Diablo was the only Middleweight to be released as an R/C toy.

Retrieved from "https://battlebots.fandom.com/wiki/El_Diablo/RC_Custom_Series?oldid=51993"
Community content is available under CC-BY-SA unless otherwise noted.