As part of a range released in 2001 by Tiger Electronics and Hasbro Dr. Inferno Jr . was 1 of 8 robots in the RC Custom Series. Like other robots in the series, Dr Inferno Jr. contained the same chassis as the other toys and built in impact sensors allowed "vitual damage" to be shown on the robot, as a result of ramming. Having the same chassis meant his lower body was out of proportion with the rest of him. Flashing LEDs on top of each toy displayed exactly how much damage it had taken, and the robot would cease to function once its  light was no longer illuminated. A prototype version was made that was Season 2.0 guise but never released. However, the final product was released during the "Tournament Edition" part of the toy range. This version was based on the real robot's Season 3.0 design and was released on its own and with Blendo.

The toy was fairly accurate but lacked any effective way to get underneath the other toys, was much taller than the real robot due to the chassis design and came with additional attachments that the real robot never used. The eyes are also red instead of purple and are much closer together. The pitchfork fit over the reciprocating spike while the sawblades fit into slots on the left and right wedge skirts. Unfortunately, the saw blade attachment that attaches to the right "shoulder" on the toy doesn't spin 360 degrees. Instead, it oscillates back and forth as the toy moves. 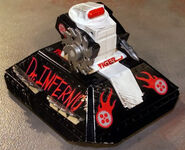 The prototype of the toy. Note the incorrect graphics. 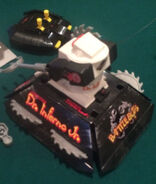 Dr. Inferno Jr. on its own sealed in its packaging.

Dr. Inferno Jr. released as a two pack during the Tournament Edition part of the toy range.
Add a photo to this gallery

Much like Donald Hutson with Tazbot and Diesector, Builder Jason Dante Bardis would feature this toy with the actual robot during the robot's introductions, then have it nearby while he was fighting.

Dr. Inferno Jr. was the only Lightweight to be released as an RC toy.

Retrieved from "https://battlebots.fandom.com/wiki/Dr._Inferno_Jr./RC_Custom_Series?oldid=52005"
Community content is available under CC-BY-SA unless otherwise noted.