As part of a range released in 2001 by Tiger Electronics and Hasbro, DooAll was 1 of 8 robots in the RC Custom Series. Like other robots in the series, DooAll contained the same chassis as the other toys and built in impact sensors allowed "vitual damage" to be shown on the robot, as a result of ramming. Flashing LED on top of each toy displayed exactly how much damage it had taken, and the robot would cease to function once its light was no longer illuminated. As the toy moves, its weapon cycles between retracting and popping out. DooAll came with a variety of extensions, like its Season 2.0 incarnation's wheel guards and a rear wedge spiked attachment. Its design is based off of its Season 2.0 design with the front scoops, rear wedge and the particular design of the pneumatic ram. However, the weapon cannot lift up to provide Dooall's "salute" and the wedge is too high to be effective. Because of the chassis design, the Dooall toy isn't invertible, much like the El Diablo toy. DooAll was also packaged with Son of Whyachi during the Tournament Edition part of the toy range.

The prototype of the toy. Note the large LED light at the back of the toy. 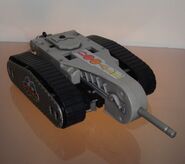 DooAll packaged with Blendo as part of the Custom Series playset.

Dooall released with Son of Whyachi during the Tournament Edition part of the toy range.
Add a photo to this gallery

Retrieved from "https://battlebots.fandom.com/wiki/DooAll/RC_Custom_Series?oldid=52002"
Community content is available under CC-BY-SA unless otherwise noted.