Alongside Biohazard, Diesector was 1 of the 2 radio controllable BattleBots made by Tiger Electronics in 2001. It is based on the Season 2.0 version of Diesector, due to the chisels instead of hammers, though the chisels are all black instead of the yellow and grey colors featured on the real robot. The model measures roughly 9 inches long by 6¾ inches wide, with the jaws measuring around 5 inches. It comes with fully functional jaws, whilst the chisels are controlled by driving movement.

It is controlled tank-style, like a real robot but does not feature an inversion switch. His victory dance is achievable but less accurate as it's much slower and you have no control over the chisels. Like the Biohazard RC, Diesector comes with three red lights shown on top that tell when the robot is on and when it is hit by an opponent, a light goes out. When all three red lights go out, the robot is immobilized. The toy also comes with a special tool designed to loosen or tighten the bolts holding the jaws in place and a steeper pair of red jaws that could allow for better grip on its opponent, though they are also about half the thickness of the regular yellow jaws. Unfortunately, the chisels are not held in place well and can come off rather easily in battle or even from regular driving. The tires are also not grey as they are on the real robot.

The toy during its early stages as shown during BattleBots Season 3.0 on Comedy Central.

The toy in later stages being picked up by a Complete Control Pro Series prototype toy during the 10th episode of BattleBots Season 3.0 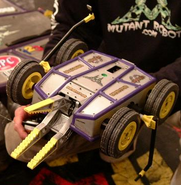 The finished prototype showcased at the Hasbro Toy Showroom in 2001.

The finished product out of its packaing, minus the extra red jaws, remote and included tool.

The toy sealed in its packaging.
Add a photo to this gallery

Retrieved from "https://battlebots.fandom.com/wiki/Diesector/RC_Pro_Series?oldid=52038"
Community content is available under CC-BY-SA unless otherwise noted.