As part of the BattleBots Happy Meal range, offered at participating restaurants between April 26th 2002 and May 23rd 2002, Diesector was 1 of the 7 licensed robots included in this promotion. The toy is based on Diesector's season 5.0 version, due to the dark tires and battle mallets. It is not very realistic, as the body shape resembles a cuboid, the robot is not invertible and its back end is flat with no wedge attached. The weapons move as you push the toy but cannot be timed well enough to be effective in battle and the mallets are constrained to about a 45 degree tilt forward. It is one of the 3 robots to be included on the promotion poster (the other 2 were OverKill and Tentoumushi) 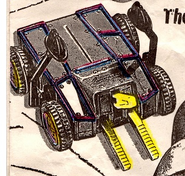 The toy as depicted on the bag it came in. 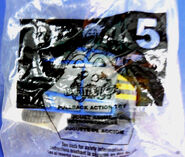 The toy sealed in its bag. 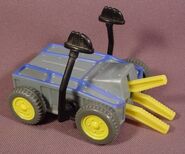 The toy out of its bag.
Add a photo to this gallery

Retrieved from "https://battlebots.fandom.com/wiki/Diesector/McDonald%27s?oldid=52143"
Community content is available under CC-BY-SA unless otherwise noted.