As part of a range planned to be released in 2016 by HEXBUG, Bronco is one of multiple robots in the Push Strike series and features its trademark flipper. Much like the original Battle Bashers toys, some of the Push Strikes feature weapons that move as the toy is pushed. In the case of Bronco, its flipping arm is activated by pressing down at the back of the flipper. The toy is easily recognizable as Bronco but like its Clutch and Clash counterpart, the wheels are gray instead of black like on the real robot. 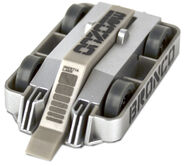 The finished toy.
Add a photo to this gallery
Retrieved from "https://battlebots.fandom.com/wiki/Bronco/Push_Strike?oldid=55700"
Community content is available under CC-BY-SA unless otherwise noted.