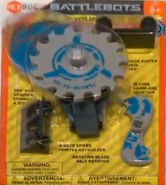 The prototype sealed in its packaging.
Add a photo to this gallery

Unlike previous products in this line, the user is not restrained to the weapon it initially is attached to. The axle can swap between the weapons at the user's discretion.

Retrieved from "https://battlebots.fandom.com/wiki/Blade_Assembly_Pack?oldid=55711"
Community content is available under CC-BY-SA unless otherwise noted.