As part of the BattleBots Happy Meal range, offered at participating restaurants between April 26th 2002 and May 23rd 2002, BioHazard was 1 of the 7 licensed robots included in this promotion and one of 8 toys overall. Prior to actual release, BioHazard was one of 4 of the toys in the range to be made of high-quality metal for marketing purposes. The toy is based on the Las Vegas 1999 version of BioHazard, due to the lack of sponsors and visible rivets. It is not very realistic, as the body is too steep to allow most robots on top of it, nor is the toy's ground clearance low enough to get underneath many of the other BattleBots toys and the wedge skirts are designed such that the gaps between them are made to look like they're held together at the bottom instead of the top. The weapon is movable, however, and works just like BioHazard's real-life lifting arm but does not have the full range of motion that the real robot's weapon has.

The toy as depicted on the bag the toy came in. 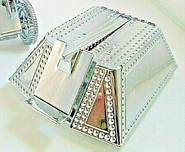 The prototype for marketing purposes 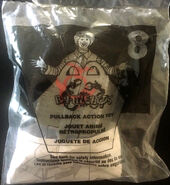 The toy sealed in its bag.

The toy out of its bag.
Add a photo to this gallery

Retrieved from "https://battlebots.fandom.com/wiki/BioHazard/McDonald%27s?oldid=59680"
Community content is available under CC-BY-SA unless otherwise noted.