Hammer
Statistics correct as of its most recent appearance on the show, or if not applicable, qualification attempt.

"There's a lot of vicious weapons in BattleBots - spinners, drums - but they all come in from the side. What's different about Beta is we come in from the top. It's very rare, people aren't expecting that, so people don't put a whole lot of armor on the top, it's all on the sides. So if we can hit it on the top, we can kill them with a good hit."
— John Reid, ABC Season 2

Beta (pronounced bee-tah and sometimes stylised as BETA) is a heavyweight robot which originally intended to compete in Season 5.0 of Comedy Central BattleBots, but had to withdraw. It also had to withdraw from the 2015 reboot season, but returned for ABC Season 2 and Discovery Season 5.

Built by John Reid of Team Hurtz to replace KillerHurtz after Season 4.0, Beta would finally debut in the modern era in ABC Season 2. The robot was built especially for the show, armored in polycarbonate with stainless steel corner panels, and was armed with a large geared hammer deemed so powerful that it needed incredibly strong magnets to keep the bot from destabilizing.

Joined by long-term teammate Dominic Parkinson as well as two-time Robot Wars champion George Francis of Chaos 2 fame, the original build of Beta showed up in a finished state to compete in the Comedy Central Season 5.0 heavyweight division. However, as its magnets pulled the floor panels up, Beta could not move under its own power in the BattleBots test arena. Team Hurtz were forced to withdraw and intended to remedy this ahead of the next competition, but the show was canceled after Season 5.0.

Beta returned to BattleBots for Season 1 of the ABC reboot, with John Reid being assisted by Dave Moulds of Team Carbide, who would later enter Cobalt under his own team for the 2016 and 2019 seasons. Multiple changes had been made to Beta in order to bring it up-to-date, including a new hammer arm which was bent so it could strike opponents even when mid-air and a suction fan system to replace the magnets. Unfortunately, despite multiple attempts to get it working, they were forced to forfeit their first match. This was due to American Airlines losing a 25kg bag of important parts for Beta on its way to San Francisco. This bag had Beta's custom weapon controller, wiring harness, armor mounting, wheel bearings, chargers and more in it. The bag was eventually found eight weeks later.

When Beta returned again for ABC Season 2, it finally worked as intended, allowing it to demonstrate its electrically-driven hammer to devastating effect. The weapon's quick fire rate, self-righting capability, and damage output quickly made Beta a crowd favorite. Joined by Grant Cooper of Team Robo Challenge - who assisted with weapon operations and repairs - Beta reached the quarter-finals of the main competition, losing a close duel with Tombstone at that stage after receiving serious damage to its armor and weapon mount.

In spite of its success, Beta did not return for either of the next two seasons, instead competing in the Chinese show King of Bots, where John Reid helped out his old rival Gabriel Stroud with his flipper bot Tánshè. He later formed part of Team Black and Blue as they entered DUCK! for the 2019 season. Similarly, Grant Cooper split off to compete with Quantum under the Team Robo Challenge name.

For Discovery Season 5, Beta was upgraded with help from his team from Tánshè, using a new shorter hammer powered by nitrogen for more power, four-wheel driven with two of the wheels being behind the hammer, and different armor configurations. Although its weapon showed a lot of power, John Reid often held back too much to save it and it often cost Beta points, especially in the main tournament. While Beta did go unbeaten in the fight cards, it was viciously disposed of in the Round of 32 and then battered in its sole BattleBots: Bounty Hunters fight.

Beta was initially confirmed to have been accepted for Discovery Season 6 though Gabriel would not have been on the team as he intended to compete with Sabretooth. However, both Beta and Sabretooth were forced to drop out of the competition due to their NIE visas being denied by the US State Department.

Beta also made an appearence in the pilot episode of the 2016 series of Robot Wars as Basher. It did not compete in the main competition due to its exclusivity contract with BattleBots, as well as the fact that Reid had already entered Series 8 with Beta's predecessor, Terrorhurtz, and would continue to do so in Series 9 and 10.

* Beta's withdrawals from Season 5.0 and ABC Season 1 are not considered to be losses.

"I hope you brought your aspirin, because you’re about to get hammered. From the United Kingdom, BETA!"

"In this symphony of misery, you'd better B-sharp or this bot will make you B-flat! It's nothing but treble! It's BETA!"

"If it were a fraternity, it would be Phi Slamma Hamma! When it rushes the Box, you'll be housed! It's BETA!"

"If it were a disease, it would be called die-a-beat-es, and sugar, it's time for your next shot. It's BETA!"

"The hammer bot from the land of Camelot, It's so dashing, even the Brits think: *British accent* "Well, isn't it just smashing?" The heavy hittin' Briton, BETA!"

"This bot collects by the British pound, and all you'll hear is its hammer sound. You've never been hit with such a force from a machine that shows no remorse. It didn't come here for a spot of tea, and it certainly won't get your sympathy. God save the Queen, this bot is straight up mean. It's BETA!"

Any appearance by Beta in merchandise are listed below: 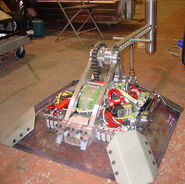 Beta in the pits at Comedy Central Season 5.0.

Beta in the pits during ABC Season 1.

Beta in the arena for ABC Season 1.