The BattleBox Arena FX is an accessory for the Battlebots Arena playset. It features the TV show's actual sounds, including:

It can either do the long intro (ie with the confirmation that both drivers or ready) or proceed to the next match without the extended intro. The volume can also be adjusted by pressing and holding the power button. The toy is attached to the arena playset using velcro but that is up to the owner to decide where to put it. It'd probably be best to put it in a place where both individuals can access it. The accessory is very accurate to the show, except that it is now down at floor level, likely as the arena playset itself is much lower as well. The accessory has been released as of May 29 2019.

The prototype attached to the playset. 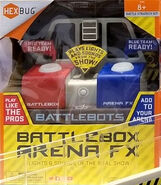 The mock-up of the accessory's packaging.

The final product out of its packaging. 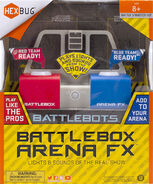 The final product sealed in its packaging.
Add a photo to this gallery

Differences from the Show

1. The timer for the toy is only for a 2 minute match

2. The audio for the toy has the referee announce the final 10 seconds of the fight instead of hearing the audio from the clock.

3. The buttons to signal for drivers that they are ready to fight flash on the toy but not in real life.

4. The buttons are much lower than in real life and in a different orientation.

5. There is no countdown on the toy for a knockout, only the final announcement.

6. The audio for the buttons being pressed to start the match is different with the toy.

Curiously, the instructions say to hit the buttons for a 2 minute match even though actual fights are 3 minutes long.

Retrieved from "https://battlebots.fandom.com/wiki/BattleBox_Arena_FX?oldid=57046"
Community content is available under CC-BY-SA unless otherwise noted.