To go with the Grip 'N Grapplers, Jakks Pacific and Road Champs released out a replica of the BattleBox itself, complete with a spike strip, four pulverizers and two sets of killsaws. In spite of being released around the era of Season 3.0, the arena is based on Season 2.0 design as there are no screws along the walls or Pistons or Hellraisers embedded into the floor. Music and sound were included but do not follow the show's sounds and instead feature an announcer similar to the one in the commercial for the toy as well as similar sounds to the drag racing christmas tree used on the show. There were two levers, one at each end and each one activated the two pulverizers and raised the set of killsaws with corresponding sound effects when using the arena outside "Try Me" mode. One side has the one button with the sounds but the rest do nothing despite looking like buttons and are probably just a mock representation of the controls Peter Lamberson used for the hazards.

The arena walls weren't held in place very securely and had a tendency to fall out as did the pulverizers so it may be recommended that you glue or tape them in place. It was relatively large, enough for possible use with the smaller toys like the Minibots, Battle Bashers, McDonald's happy meal toys or Battle Chains because of their relative size to the arena. Apart from the arena walls, the base itself is rather sturdy and unlikely to break. Due to the gaps in the arena walls designed for the players to battle, it wasn't a fully enclosed arena unlike the real life version. It was released in three different editions. There was the plain BattleBox, which was the arena playset, nothing else, the Ultimate BattleBox Arena, which was the same as the regular Battleox except that it came with Grip N' Grapplers Diesector and Tazbot, and the Toys 'R' Us exclusive set called "Champions of the Arena", which came with the arena, its parts, 2nd Edition Grip N' Grapplers Tazbot, Diesector, Ziggo and Grendel and a winner's pog like the Third Edition Grip 'N Grapplers winners pogs.

Differences from the Prototype[]

1. The Pulverizers are about an inch further in compared to the playset seen on the box.

2. There's 2 holes on the Red Square side of the prototype shown on the box.

3. The BattleBots logo appears more fuzzy and bold compared to the sticker included.

4. The piece that holds each Pulverizer in place is thicker than what the actual toy Pulverizers were held with.

5. There is no sign of the control panel that had the Play button on the prototype

6. The Killsaws are 90 degrees from where they are on the toy.

7. The levers that operate the hazards have a more defined location.

8. The spike strips for the walls appear to be individual strips of rubber, at least for the walls next to where the Grip 'N Grapplers are meant to be used.

9. The Pulverizers are also more metallic in color compared to the actual toy versions.

10. The plastic windows that the spike strips fit into appear to be thicker than the actual toy's and much more capable of fitting together smoothly.

11. The top of each Pulverizer's tower for the prototype has a notch where the hammer would supposedly rest when not in use. 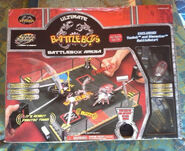 The Champions of the Arena Battlebox Playset.